November 15, 2017 — Dental treatment may significantly lower the blood pressure of patients at risk for heart disease, a new study has found. Patients with prehypertension who received scaling and root planing ultimately had blood pressure that measured more than 10 points lower than those who did not.

This was the first time a study linked intensive periodontal treatment alone to reduced blood pressure levels, according to the researchers, led by Jun Tao, MD, PhD, from the First Affiliated Hospital of Sun Yat-sen University in Guangzhou, China. They presented their groundbreaking findings at this week’s American Heart Association (AHA) 2017 annual meeting in Anaheim, CA.

“Something as basic as periodontal care may be able to reduce the risk of future high blood pressure and cardiovascular events,” stated AHA spokeperson Richard Becker, MD, a professor and the director of the division of cardiovascular health and diseases at the University of Cincinnati College of Medicine and director of the university’s Heart, Lung, & Vascular Institute, in a press release that accompanied the study.

Link between heart and gum disease

Multiple studies have previously linked periodontal disease with cardiovascular disease, but fewer have investigated a direct relationship. Therefore, Dr. Tao and colleagues explored whether intensive treatment for periodontal disease alone could ultimately have an effect on blood pressure.

To find out, they conducted a single-blind randomized clinical trial with 107 Chinese adult patients. All patients had prehypertension and moderate to severe periodontal disease.

At the beginning of the trial, the patients were split into two randomized groups. The control group received four weeks of basic dental care, which included oral hygiene instructions and tooth scaling above the gum line, while the intervention group received four weeks of intensive periodontal treatment, which included scaling and root planing, antibiotic treatment, and extractions when necessary. 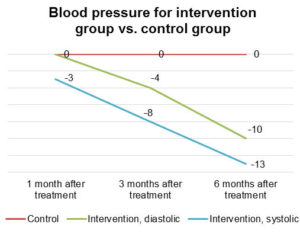 The researchers cautioned that additional research is needed, including with patients from diverse backgrounds. Nevertheless, the study is important because it demonstrates a direct relationship between periodontal treatment as an intervention and improved blood pressure. As a result, periodontal treatment in combination with other proven steps to treat and prevent heart disease, including exercise and diet, could improve the health of millions, Dr. Becker noted.

“A combination of things that are readily available to people could, in fact, have a major impact on health both in the United States and throughout the world,” he stated.